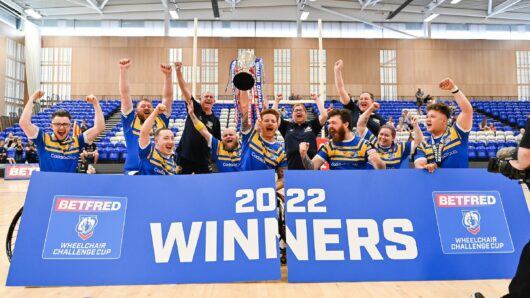 Leeds Rhinos Wheelchair won the Betfred Challenge Cup for the third time in row after a fierce battle against French champions Catalans Dragons at the Allam Sport Centre in Hull.

Rhinos Player-Coach James Simpson inspired his team to a sensational 48-34 victory with a hat-trick, but the French side proved a tough test for the holders and led twice in the Final. After Simpson got the scoring underway, the Dragons hit back with a try from Hiverant and then England international Bechara and Vargas added a try each to put their team in front 16-4 inside the opening quarter.

Two tries from Player of the Match and England captain Tom Halliwell put Leeds right back in it and the ever impressive Nathan Collins added three conversions and two penalties to edge the Rhinos in front 20-16 at the break.

Welsh international Jodie Boyd-Ward pushed the Rhinos further ahead with the opening try of the second half but Catalans struck again with Bourson scoring soon after. Simpson settled the nerves with his second try, but Clausel and Soursez put the Dragons ahead.

Following a sustained period of pressure on the Catalans try line, Simpson showed his class again to pull one back for Leeds and then Nathan Collins and Josh Butler added further tries apiece to secure a memorable win for the Rhinos.

There were emotional scenes at the full time, with the magnitude of winning their third Challenge Cup in a row- against arguably their toughest opponents yet- not lost on any of the players or coaches.

Speaking after the game, Leeds Rhinos player-coach James Simpson told BBC Sport: “I thought it was brilliant and an amazing standard from both teams. Two quality sides came down to fight. I said to our guys before, if you can look in the mirror tonight and know you’ve given it everything then well done, you’ve won.

“It shows in the performance now that everyone laid it out on the line. I genuinely think we did the impossible.”

“Half of that team are internationals and we had a gameplan, we stuck to it, put momentum on them when we had to and I feel like we did the impossible. We put a massive marker down. If that’s the marker we can put down today, we’ve got to keep doing that.”

Have you enjoyed watching the Wheelchair Rugby League on TV? Fancy a new challenge? Then why not come give it a try with us in July!

Leeds Rhinos Wheelchair are running social sessions every Wednesday in July from 7pm-7:45pm at Leeds Beckett University for anyone who fancies giving Wheelchair Rugby a try! Rhinos captain James Simpson will be on hand to teach you the basics and show you how to play this incredible sport!

Best of all, it’s fully inclusive and absolutely ANYONE can play- these sessions are open to men, women or children, whether you are disabled and non-disabled, and all equipment will be provided!

If you have any questions or for more information, please contact ed.bates@leedsrhinosfoundation.org. 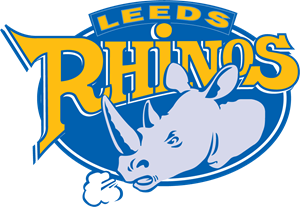 Thanks for reading our post. For more information and updates visit TheRhinos.co.uk

This website uses cookies to improve your experience while you navigate through the website. Out of these, the cookies that are categorized as necessary are stored on your browser as they are essential for the working of basic functionalities of the website. We also use third-party cookies that help us analyze and understand how you use this website. These cookies will be stored in your browser only with your consent. You also have the option to opt-out of these cookies. But opting out of some of these cookies may affect your browsing experience.
Necessary Always Enabled
Necessary cookies are absolutely essential for the website to function properly. These cookies ensure basic functionalities and security features of the website, anonymously.
Functional
Functional cookies help to perform certain functionalities like sharing the content of the website on social media platforms, collect feedbacks, and other third-party features.
Performance
Performance cookies are used to understand and analyze the key performance indexes of the website which helps in delivering a better user experience for the visitors.
Analytics
Analytical cookies are used to understand how visitors interact with the website. These cookies help provide information on metrics the number of visitors, bounce rate, traffic source, etc.
Advertisement
Advertisement cookies are used to provide visitors with relevant ads and marketing campaigns. These cookies track visitors across websites and collect information to provide customized ads.
Others
Other uncategorized cookies are those that are being analyzed and have not been classified into a category as yet.
SAVE & ACCEPT
Powered by